We are often involved in commercial work in the local area. With a recent push from the council to encourage more purpose-built student accommodation we have seen an increase in custom from this area. It’s great to be able to be involved in such projects and it always amazes us to what high standards developers produce these builds. Lancaster itself is a historical city, with many of its original features still existing, Lancaster Castle for example, but it is a city that is also heavily influenced by the University and students. Quite often we find that student accommodation developers wish to retain as many traditional features of the buildings that they are developing as a subtle nod to their understanding of this historical city.

When work began on this particular development, we liaised with the team to find tiles suitable to compliment the original features they wished to retain. There was to be quite a bit of exposed brick work that would be worked into the design. There was also a requirement to have a slight industrial chic look to it, with an element of old meets new going on.

Bathrooms were tiled predominantly floor to ceiling apart from where the exposed brick was worked in. Nickon 40x120 cm was used on the majority of the walls with the corresponding chevron décor tile in the shower area. Nickon is a beautiful, mid grey, stone effect tile with eye catching white veining through it. The décor features a 3D, on trend chevron design with texture – perfect enough for any contemporary space but subtle enough to compliment traditional features. The bathroom floors are also tiled in Nickon, but the square floor tile of the collection, whilst the shower area floor has been tiled is a stone effect mosaic to allow for a wet room floor, eliminating the need for a shower tray. 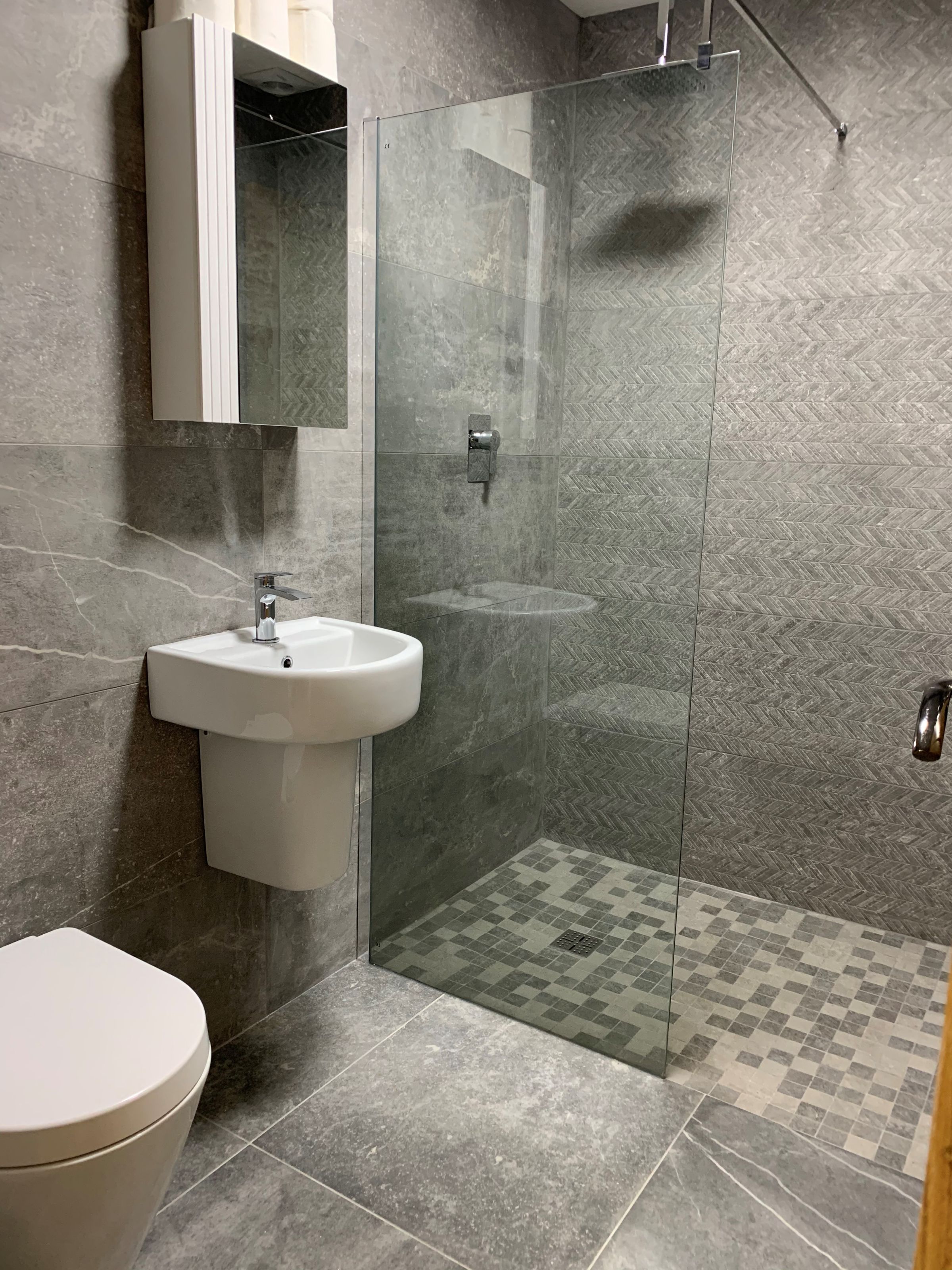 This build compromised of en-suite bedrooms with a communal living space and some studio apartments. The kitchen splashback area was tiled with a tasteful and neutral slim, rectangular tile with a subtle patterned design to it. Each tile bore a different pattern which created a kind of patchwork effect. The kitchen units were all dark grey and high gloss so the tiles chosen were a slightly off white with a greige pattern to them, plucking the grey of the units out quite nicely yet adding a brightness to the room. 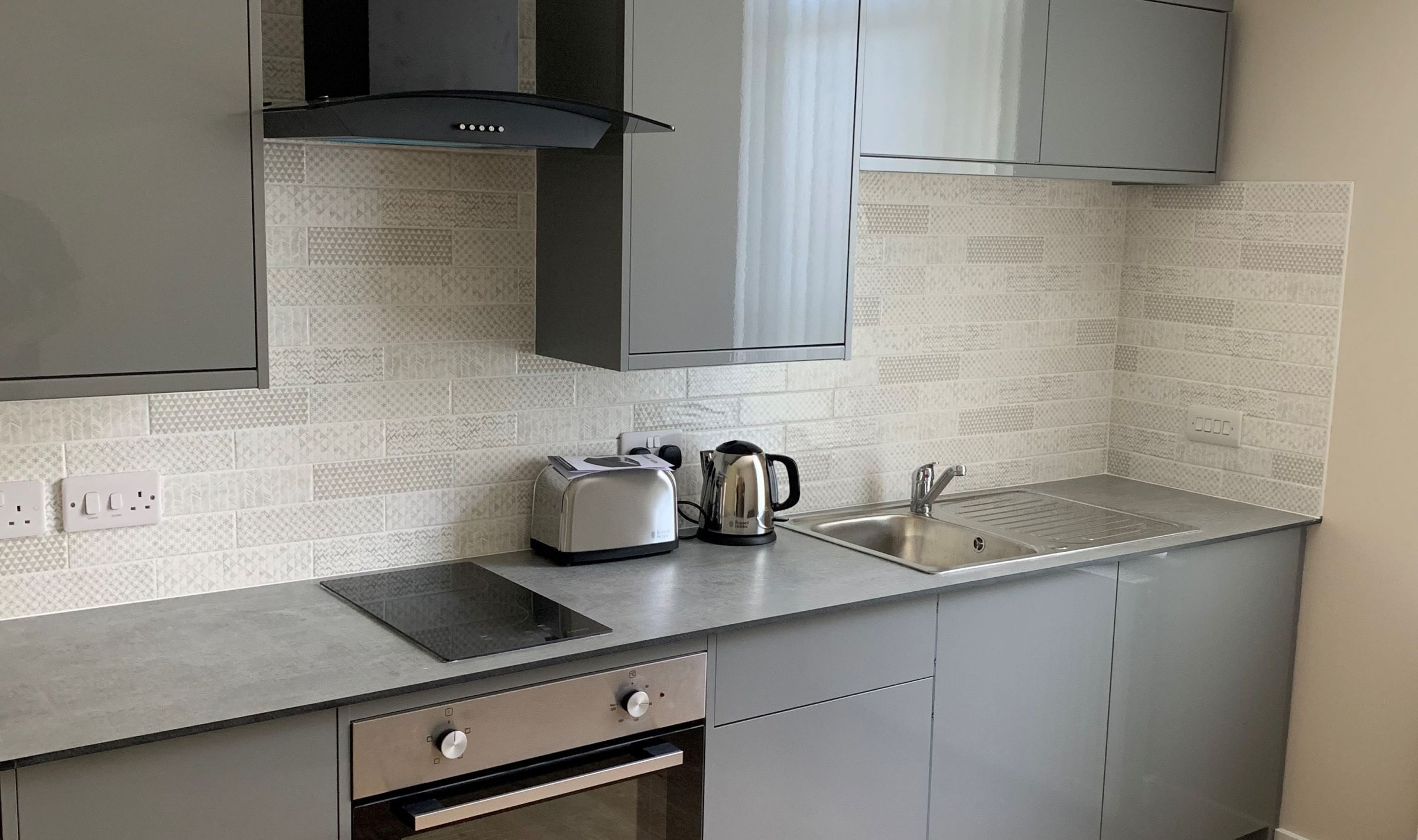 The communal living space floor was tiled in large format, industrial inspired tiles to ensure this high traffic area stood the test of time. Oxidatio Tellurium is a 60x120cm tile with a copper colourway and metallic tones perfect for complimenting the exposed, traditional stone and in keeping with the contemporary finish the developer was after. 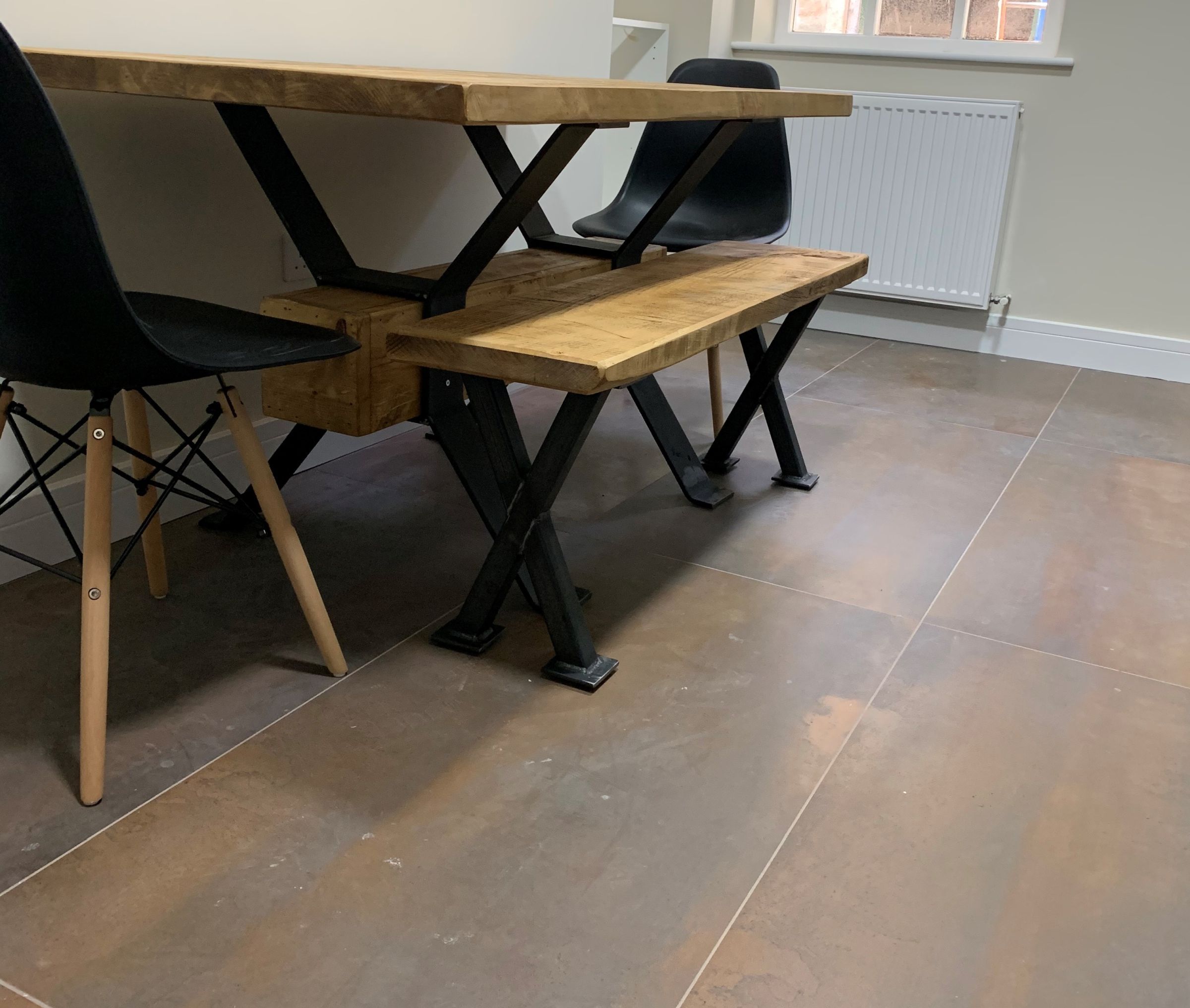 Finally, the staircase and hallway area had a feature wall of split face stone all the way up to the top. This not only added a fantastic feature to the staircase, but it reflects light all around the space from the skylight in the roof. A great addition to what could have been a very boring space. We are so thrilled to have been part of this student build and look forward to working with the developer again. 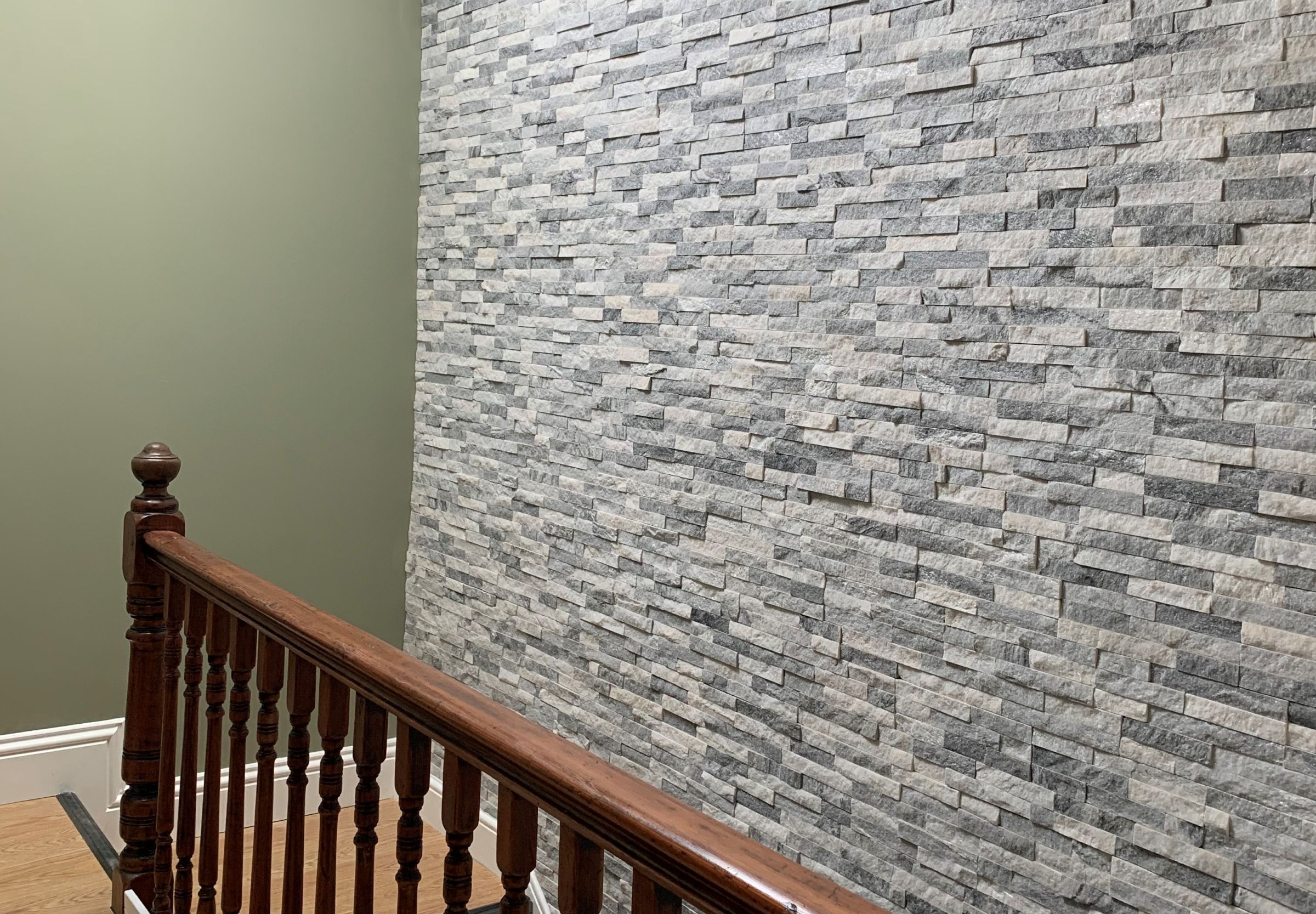 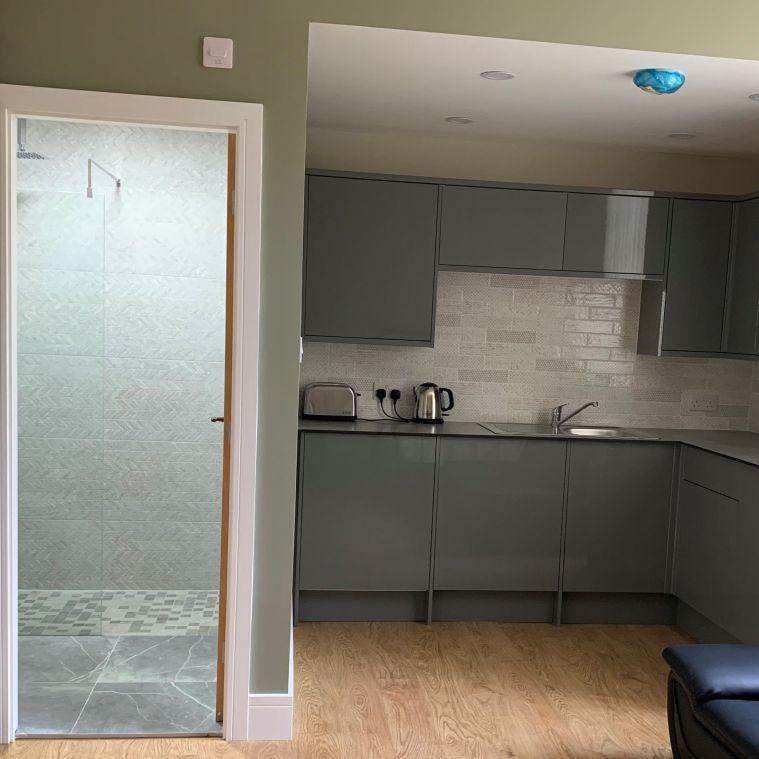 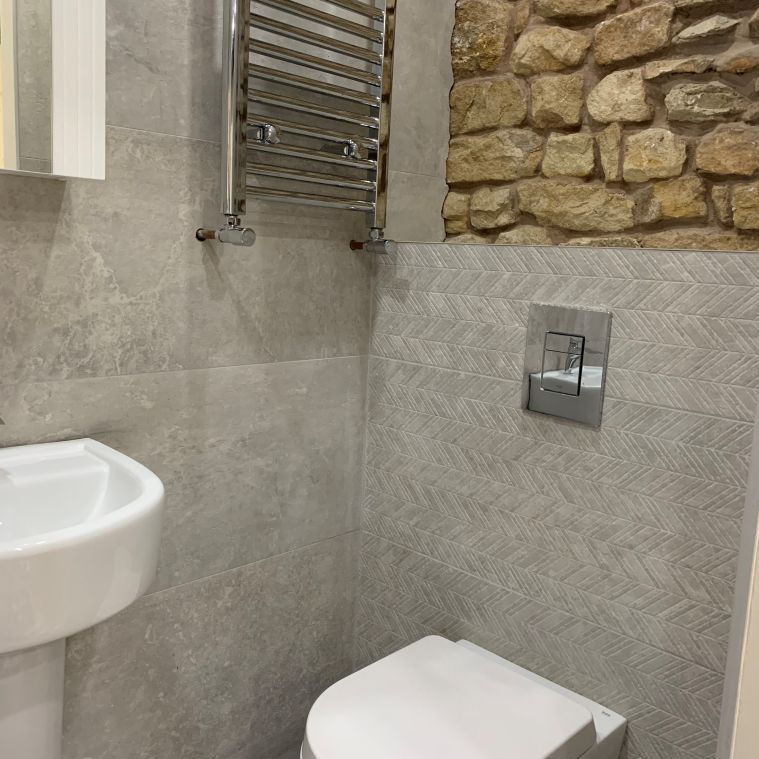 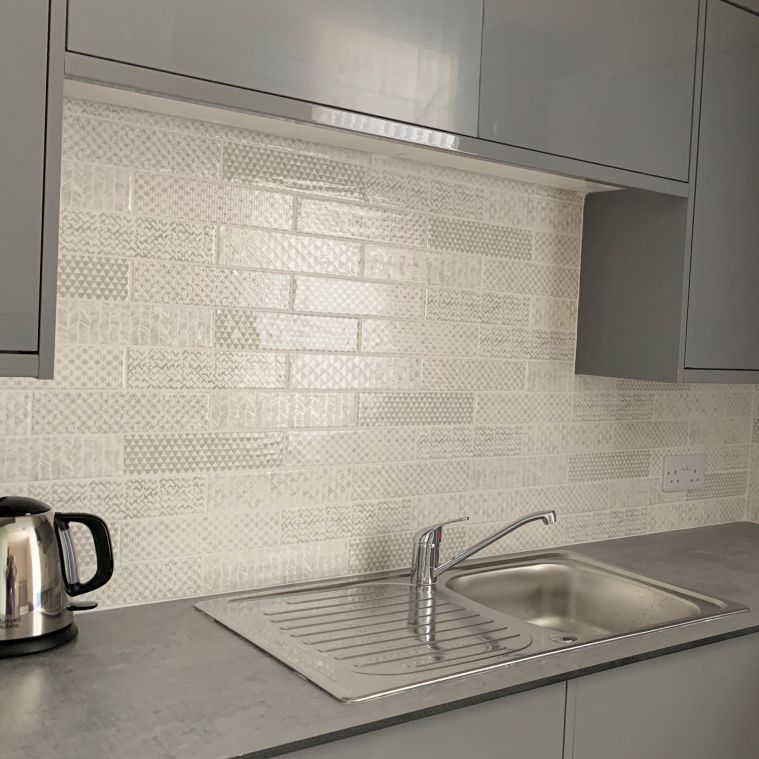 I cannot speak highly enough of Rees Tiles. True professionals with an eye for detail. From initial consultation along with help with choices and designs which fitted perfectly with our vision. This professionalism continued throughout or project, they really did go above and beyond and were available for advice no matter how small at all times! If you are looking for quality both in product and service, then look no further. Honestly, we love them!

The team at Rees Tiles were super. They were really helpful when choosing our tiles for 3 rooms in our refurb.

We felt very confident when chatting to Holly and Steve about our ideas. They provided invaluable advice about all of the types of tiles we wanted. They were very friendly and gave us time to think about our ideas, even allowing us to bring in our kitchen cupboards to match the colours perfectly. Thank you!

We recently undertook a self-build project and had both the bottom floor and all the bathrooms to tile. Steve was really helpful from the outset and just "got" what I was after straight away, picking out a selection of tiles that were all suitable. It meant that rather than taking ages to choose, I'd actually picked most of the options in my first visit - which is great when you have so many other decisions to make! Steve and the rest of the team were great throughout the whole process and I wouldn't hesitate in recommending them to others.

We are really happy with the service we get from Rees Tiles. Steve always responds to emails quickly, with a quick turnaround on quotes and great products supplied.

I have had the pleasure of dealing with the team at Rees Tiles over a number of years and have always found them to be knowledgeable and helpful, an all round first class service.

We find our relationship with Rees Tiles very professional and reliable. The fact that we can call to order stocked tiles and receive them to site the following morning is fantastic. It means that no job is held up and the turnaround for the end purchaser is smooth and quick.

Looking for tiles for our bathroom, kitchen and extension floor was made easy by the fantastic displays and huge choice of tiles available at the Rees Tiles and Flooring showroom in Lancaster. Steven and Holly were very obliging, offering us their knowledgeable advice on finishes and grout colours, and also allowed us to take various samples home to try. Rees Tiles is the place to go for a wonderful selection of quality tiles with a helpful, friendly service.

When we decided we wanted to update all the en-suites at The Sun Hotel we called into Rees Tiles and Flooring by chance and I am so thrilled we did. From start to finish the service was fantastic and we couldn’t have asked for more. Using Rees Tiles and Flooring made what could have been a stressful time so much easier. I’d be happy to recommend them to anybody who requires tiles.

Patient and Helpful with a Beautiful outcome! We were searching for the perfect shades and textures for the floor and bathrooms in our new home, which we finally found thanks to the expert and friendly team at Rees Tiles and Flooring. From start to finish they were wonderful, delivering tiles and underfloor heating when we needed it so the fixer could keep to the planned timescales. Great service and amazing products.

Steve and the team at Rees Tiles have been great in helping us choose what would work with the kitchen. They were really excited when we said we wanted to use large tiles in the kitchen, and this made us feel even more certain we’d made the right decision.

The team at Rees Tiles assisted me in matching up colours and explaining which would work best in my home. They worked alongside the people working on my house really well and I didn’t have to be involved which made it really stress-free for me – something which is appreciated when moving to a new house! I’m so pleased with my bathroom and kitchen and am planning on getting some tiles for my hallway soon!

We have over the last 3 years totally refurbished our 5-star Silver award B&B. Rees Tiles and Flooring have supplied all the tiles for our bathrooms and kitchen and we cannot praise them highly enough. The tiles are top class quality as is the service received from Steve and his staff. We would not buy tiles in the future from anywhere else and would recommend them to anyone.

Everyday durability and long-term maintenance are important factors when choosing any product, especially for use in a commercial environment. We’ve used many grouts and sealants over the years but found nothing that goes the distance when it comes to deterioration or discolouration.

I would certainly recommend Rees Tiles and Flooring Ltd to anyone. From the minute I walked in I was greeted with a smile and received fantastic service. The team helped me in selecting the tiles for my main bathroom, en-suite and kitchen. Rees Tiles are willing to go that extra step further to make sure the customer is completely satisfied – it’s just a shame I have nothing else I need to tile now!

My mum has used Rees Tiles for years and it was off her recommendation that we got in touch with Steve and Holly. They listened to what we wanted and understood the look we were trying to achieve. We borrowed samples and by having the tiles at the house we were able to decide what worked best in the space and lighting. I especially like the colours in the mosaic, and everyone always compliments on how eye-catching and effective they look. Thanks for all your help Rees Tiles!